Members of the Forum are:

Apologies were received from

The Hon Michael McCormack MP chaired the Forum in the absence of the Hon Marlene Kairouz MP.

CAF’s objective is to provide the best and most consistent protection for Australian and New Zealand consumers through its consideration of consumer affairs and fair trading issues of national significance and, where possible, development of consistent approaches to those issues.

Review of the Australian Consumer Law

Consumer Affairs Ministers discussed the outcomes of the Australian Consumer Law (ACL) review completed by Consumer Affairs Australia and New Zealand (CAANZ) in March this year.
Ministers thanked officials for their work on the review, noting its comprehensive and broad ranging nature, the extensive nationwide consultation and the comprehensive nature of the proposals in the final report.
Ministers noted that the introduction of the ACL in 2011 has helped empower consumers, lower business costs and reduce the number of disputes, as demonstrated by the Australian Consumer Survey, summarised in Attachment A. Ministers welcomed the opportunities identified in the report to improve and enhance the consumer law.
Consistent with the proposals set out in the final report of the review, Ministers:

Ministers noted that the Commonwealth Treasury will undertake regulatory assessment of ticket onselling with the assistance of CAANZ members.

Ministers also directed officials to develop a consumer education campaign as an interim measure to improve consumer understanding and awareness of the secondary ticket selling market.

Ministers noted that the Commonwealth Treasury will undertake regulatory assessment of fees for paper billing with the assistance of CAANZ members.

Disadvantaged groups of consumers including ageing, Indigenous and regional Australians have some of the lowest rates of internet access in Australia. As Australian businesses increasingly provide bills in digital form, and some charge consumers to receive paper bills, there is a risk that these disadvantaged groups will pay a disproportionate price to receive vital communications.

Ministers also directed officials to develop a consumer education campaign as an interim measure to improve consumer understanding and awareness of exemptions from fees for paper bills.

Ministers noted recent media reports alleging unfair practices against older Australians in the retirement village sector. Ministers acknowledged that some jurisdictions have recently implemented and continue to move ahead with reforms that will improve consumer protections.

Ministers agreed to direct CAANZ to undertake further investigation into the regulation of retirement villages including identifying any regulatory gaps that allow unfair practices to occur.

Ministers acknowledged that addressing the conduct of debt management firms will require a coordinated Commonwealth policy approach. Ministers noted the Commonwealth will commence work in 2018 to determine the merits and feasibility of debt management firms coming into the financial services regulatory framework. States and Territories will provide full assistance to identify data to support this work.

Australian Ministers agreed to support all steps necessary to expedite the regulatory impact assessment process and any other safety measures necessary to introduce a consumer safety quad bike rating system and a safety standard.

Ministers noted the progress of key CAANZ national projects over the last 12 months including the consumers with a disability project, music festivals, free-range egg labelling, ‘pop-up’ events and the sharing economy. 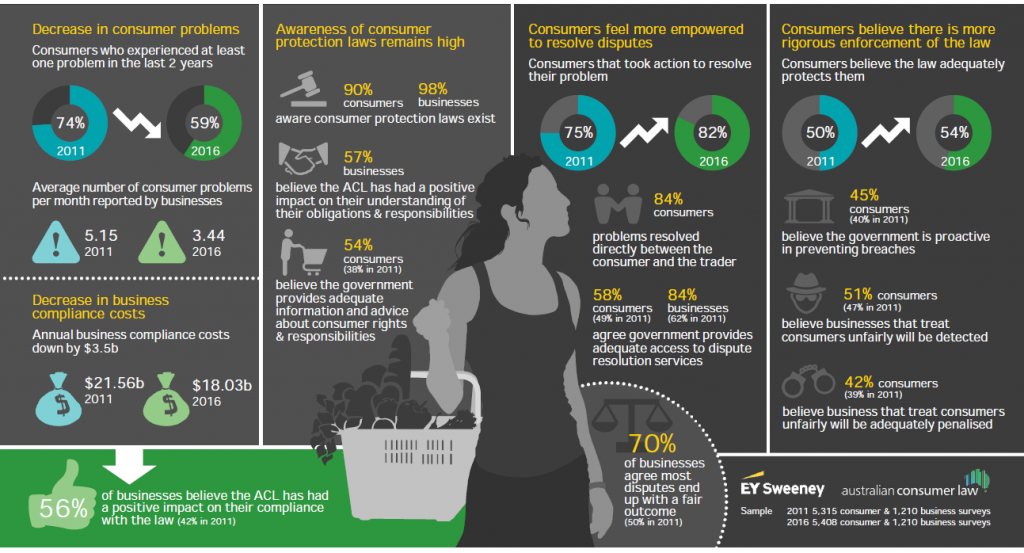 ATTACHMENT B
Review of the Australian Consumer Law, 2017 - Proposals considered by Ministers, 31 August 2017

Regulators will issue guidance or explore further options for these items

A1
Guidance on ‘unsafe’ and ‘reasonable durability’

Regulators will work with stakeholders (including tribunals) to provide more specific guidance on both ‘unsafe’ goods and ‘reasonable durability’.

A3
Product bans and recalls

Regulators will explore options to streamline processes for implementing product bans and mandatory recalls, taking into account findings of the Productivity Commission’s study of Consumer Law Enforcement and Administration.

A4
Charities,
not-for-profit organisations and fundraisers

Regulators will issue guidance clarifying the current application of the ACL to the activities of charities, not-for-profit entities and fundraisers.

Clarify the mandatory text requirements for warranties against defects by developing text specific to services and services bundled with goods.

Clarify the scope of the exemption from the consumer guarantees for the transport or storage of goods where those goods are damaged or lost in transit.

Strengthen ACCC powers to obtain information about product safety, by broadening the power to apply to any person (including a consumer) likely to have relevant information, rather than just the supplier.

Extend the ACL (and ASIC Act) unconscionable conduct protections to
publicly-listed companies.
NOTE: The Chair of CAF will write to the Commonwealth Minister responsible for the ASIC Act to seek their agreement to the amendment.

Enable regulators to use existing investigative powers to better assess whether or not a term may be unfair.
NOTE: The Chair of CAF will write to the Commonwealth Minister responsible for the ASIC Act to seek their agreement to the amendment.

Ensure that the unsolicited selling provisions operate as intended by clarifying that the provisions:

Enhance price transparency in online shopping by requiring that any additional fees or charges associated with pre‑selected options are included in the headline price.

Ease evidentiary requirements for private litigants through an expanded ‘follow‑on’ provision enabling them to rely on admitted facts from earlier proceedings.

Increase maximum financial penalties available under the ACL by aligning them with the penalty regime under the competition provisions of the Competition and Consumer Act 2010:

Allow third parties to give effect to a community service order under the ACL.

Amend the definition of ‘unsolicited services’ in section 2 of the ACL to allow the false billing provisions (sections 40 and 162) to apply to false bills for services not provided.

Amend section 12DC of the ASIC Act to address terminology that is inconsistent with other consumer protection provisions in the ASIC Act and that may unintentionally narrow the scope of the provision.
NOTE: The Chair of CAF will write to the Commonwealth Minister responsible for the ASIC Act to seek their agreement to the amendment.

Amend section 76 of the ACL (or the regulations) to clarify that disclosure requirements for unsolicited consumer agreements do not apply to certain exempt agreements.

Rights to refunds and replacements

Specify that where a good fails to meet the consumer guarantees within a short specified period of time, a consumer is entitled to the remedies of a refund or replacement without needing to prove a ‘major failure’.

Introduce a general safety provision into the ACL.

Ministers directed CAANZ to place these seven research and policy projects on the forward work program and the 2018-21 Strategic Agenda, noting the importance of stakeholder engagement in ongoing policy development.

Looking to the Future 1 Commencing 2021

Commission a third Australian Consumer Survey in 2021 to assist with regular monitoring and review of the ACL.

Promote enhanced collection and dissemination of product safety data, taking into account findings of the Productivity Commission’s study ofConsumer Law Enforcement and Administration and initiatives undertaken by other regulatory regimes.

Explore how an unfair trading prohibition could be adopted within the Australian context to address potentially unfair business practices.

Undertake an economy-wide study to examine the role, nature and impact of unsolicited selling in the Australian economy, to inform future policy development.

Assess the effectiveness of the proposed guidance on not-for-profit fundraising, further regulator actions, and whether any amendment to the ACL is necessary.

Looking to the Future 7
Ongoing as priorities arise

Review current exemptions, with a view to removing those that are no longer in the public interest.